Saratov stands on the bank of the Volga river, having delicious sturgeons with caviar, supplied to other regions. This peculiarity was pictured on the city’s coat of arms, which shows 3 sturgeons shaped as a star on the blue background. 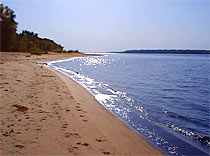 The region territory stretches from the west to the east for 500 km, from the north to the south for 150 km in the western part and for 300 km in the eastern part. The Volga river divides the region into two parts: right-bank in the west and left-bank in the east, which is called Zavolzhie. The region area equals the area of such countries as Belgium, Switzerland and Albania combined.

Taking into consideration the level of industrial development, Saratov region is third place in the Volga economical area. As far as the level of agriculture is concerned, it is number one place. Enterprises and companies of the region export goods into more than 67 countries of the world.

Saratov is one of the biggest rail junctions in Russia. It connects the Central Russia with the Ural, Siberia and Central Asia. A new international rail line Saratov-Berlin has been functioning since 1993. 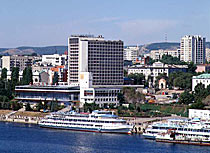 Saratov is one of the largest river ports in the Volga region. River routes connect Saratov with Moscow, the main industrial center of Russia (via the Channel named after Moscow), the Eastern Urals (via the Kama river), the Black sea (via the Volga-Don Channel), the Baltic sea (via the Volga-Balt river system).

Today Saratov is a big city with a population over a million. Being a large urban area with a fairly well-developed entertainment infrastructure (the city has 5 theaters, the oldest circus in the country, wonderful art gallery, known also as «Volga Hermitage», a variety of nightclubs, casinos and movie theaters, and a good selection of restaurants), it’s, at the same time, very quiet and pleasant. Visitors enjoy strolling along the streets of Saratov, architecture and parks of the city. There are a lot of well-known historical places in and around the city, such as the landing site of the first human astronaut — Yuri Gagarin and birthplace of many famous Russian people.

The history of Saratov is linked with the history and the culture of Russia names of the Tsar Peter the Great, E. Pugachev. The names of outstanding people are connected with Saratov, the famous scientists I.Bardin, N.Semenov, the actors O.Tabackov, O. Yankovskiy, B.Andriev, and the well-known writers M.A.Voronov, I.A.Salov, N.Chernyshevsky, L.Kassil, K.Fedin were born or lived in the city.

Saratov has moderately continental climate with warm and dry summers and an abundance of sunny days. In summer temperature in Saratov raises above +25C, which is perfect for relaxation at the huge artificial beach on Volga river. Winters are slightly freezing and bring a lot of snow, the temperature usually stays around -10..-15C. One of the favorite occupations of Saratovites in the cold season is skiing and snowboarding in the hills.

The favorite places of recreation and sightseeing is Kirov Avenue, which is a traffic-free zone, with a great number of the shops, night clubs, cafes and restaurants, where one can have a wonderful meal. 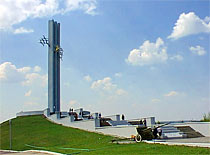 There are many monuments in Saratov. Open-air Military Museum (Park of Victory) on the Sokolovay Hill and a huge monument with cranes at its top devoted the memory of Saratov citizens who perished in the Great Patriotic War is one of the most famous in Russia. Other monuments are connected with the names of well-known people. There is a world famous picture gallery (Fine Arts Museum) in Saratov which was opened to the public on July 26, 1885. It is one of the largest picture galleries in Russia. Named after Radishchev, museum contains more than 15000 outstanding works of Russian and European artists. One can also visit the Museum of Local Lore. It acquaints you with history, ethnography, flora and fauna of the area.

Saratov is a great center for theatres, opera and ballet. The first theatre appeared in the town in 1803. The famous actors: V.Komissazheiskaya, N.Strepetova, V.Kachalov-played on the stage of Saratov theatres. 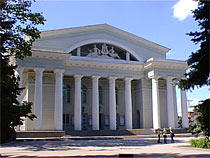 The Chernyshevskiy Opera and Ballet Theatre, which stages Russian and world classics, the Drama theatre, which presents classical and modern plays, the Theatre of Young Spectator. There is also a musical comedy and a puppet theatre for children.
Music in all its forms has a substantial following. The widespread interest in classical music is reflected in large audiences of concerts in the Saratov State Sobinov Conservatoire and Philarmonia.

There is a lot of Palaces of Culture and different Clubs, where one can have a nice time.

The Russian National Circus was founded more than a century ago by the Nikitins. It was the first Russian permanent circus. Now it is very popular among the children and adults. The citizens of Saratov are proud of their city-its architecture, history, traditions and culture.